A few days ago, I wrote an article about the difference between “cemetery” and “graveyard” in English; in short, a cemetery is any place designated for burying the dead, whereas a graveyard (strictly speaking) belongs to a church.

What turns out to be even more interesting than a subtle (and often forgotten) distinction in English is how the words are used in other languages. The translations are most commonly derived from the Greek word koimeterion (“a sleeping place”), corresponding to the red colour in the map: 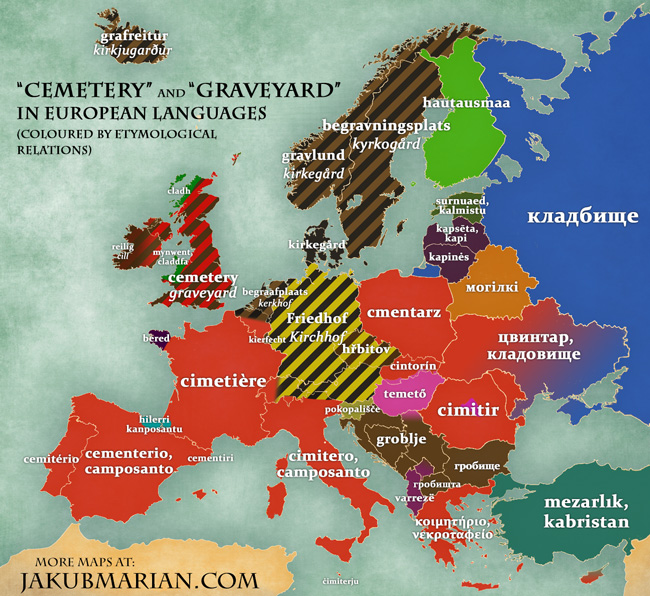 In most Germanic languages, the translation of cemetery is derived from Proto-Indo-European *gʰrābʰ- (“to dig”), which is also the root of English “grave”. German is an exception: Friedhof literally means “peaceyard” (but, originally, it meant “protected yard (by a fence)”). Cemeteries adjoined to a church begin with words like Kirch-, kirke-, and similar, which mean “church”.

Translations into Slavic languages are more diverse. Some are also derived from *gʰrābʰ-, such as Serbo-Croatian groblje, others from Greek koimeterion, such as Polish cmentarz, and yet others from other roots, usually having something to do with digging or putting.

The case of Czech is quite unusual. The Czech word hřbitov was formed by merging břitov, which is a distorted version of German Friedhof, and hřbít, which is yet again derived from *gʰrābʰ-.