Santa Claus is relentlessly trying to get into our European households (mostly through our mailboxes rather than chimneys), but Father Christmas, Baby Jesus, Grandfather Frost, and other traditional gift-bringers have managed to fend him off so far (for the most part).

Each country (or region) has its own traditional Christmas-time gift-bringer. Some of them are quite nice, such as the British Father Christmas, others are outright weird, such as the Catalan “defecating log”, but all of them are equally interesting. The following map shows the gift-bringers’ names with translations, coloured by relatedness of the concepts themselves (that is, not by etymological relatedness of the names).

Please note that in many countries, children receive small gifts on the eve of Saint Nicholas Day (on 5 or 6 December). This tradition is not mentioned in the map. 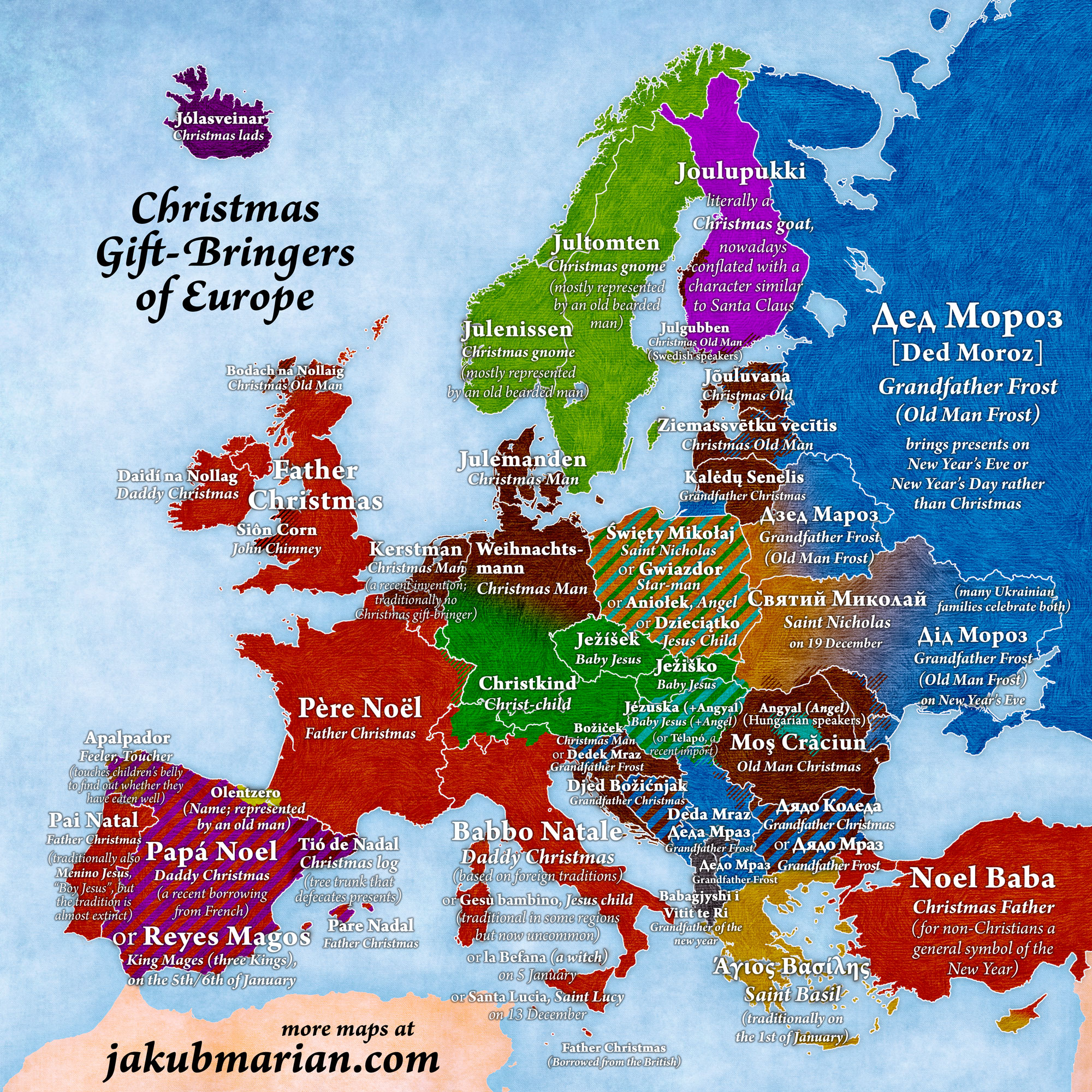 Please note that some of the stripes and gradients may not represent the actual geographical distribution completely accurately; they just show general geographical trends. For example, Weinachtsmann is more common in the north of Germany, Christkind (or Christkindl) in the south, but the border is not entirely clear.

In Ukraine, the gift-bringer during the Soviet era was Did Moroz. Nowadays, many families in the west of the country switch to Saint Nicholas, who brings gifts on the 19th of December (which is the Saint Nicholas day in the Eastern Orthodox liturgical calendar), whereas in many others both dates are celebrated.

In Poland, the four variants are mostly regional (only one of them is typically common within a certain region). However, since there is not enough space in the map to show the regional variations, Poland is simply shown with stripes. There is also another variant, Gwiazdka (meaning “little star”), which is related to Gwiazdor and which did not fit in the map. Another, even less common one, is Dziadek Mróz (Grandfather Frost), imported from eastern Slavs.

In Spain, the traditional Christmas gift-bringers are the Three Kings who give children presents on the night of the 5th of January or the morning of the 6th of January, but the tradition is partly becoming replaced or supplemented by Papá Noel (influenced by Santa Claus, name imported from France), who brings gifts on Christmas Eve.

In Russia and several other members of the former Eastern Bloc, Ded Moroz gives presents to children on New Year’s Eve rather than Christmas Day. Although he was originally a pagan character, in the 19th century he became a Christmas figure, akin to Father Christmas and other Western European traditions. During the Soviet era, when celebration of Christmas was discouraged (and in some countries even completely forbidden), he became the symbol of New Year’s celebrations.

In Hungary, the traditional Christmas gift-bringer is Jézuska (often accompanied by an angel), while Télapó is equivalent to Saint Nicholas (who brings presents on the 5th or 6th of December). However, there are also families in which Télapó brings presents at Christmas (likely under the influence of Santa Claus)… At least according to some of my readers, who insisted that I add it.

Here’s the same information as above in the form of an alphabetical list: