Each country name has a distinct adjectival form in English, which is used when speaking about something related to the country, e.g. “German cars” or “Swiss Army knives”. These adjectives are also used to describe the language spoken in the given country—unless, of course, the country is multilingual, as in the case of Belgium, Cyprus, and Switzerland, or speaks a language more commonly associated with another region, such as Andorra, Austria, and Kosovo (see my map of the languages of Europe).

When there are two different adjectives associated with a country, usually only one of them is used as the name of the language. The languages of the Faroe Islands, the Netherlands, Luxembourg, and Slovakia are usually called Faroese, Dutch, Luxembourgish, and Slovak, respectively. Slovene and Slovenian are an exception; both are commonly used as the name of the language spoken in Slovenia. Without further ado, here is the map: 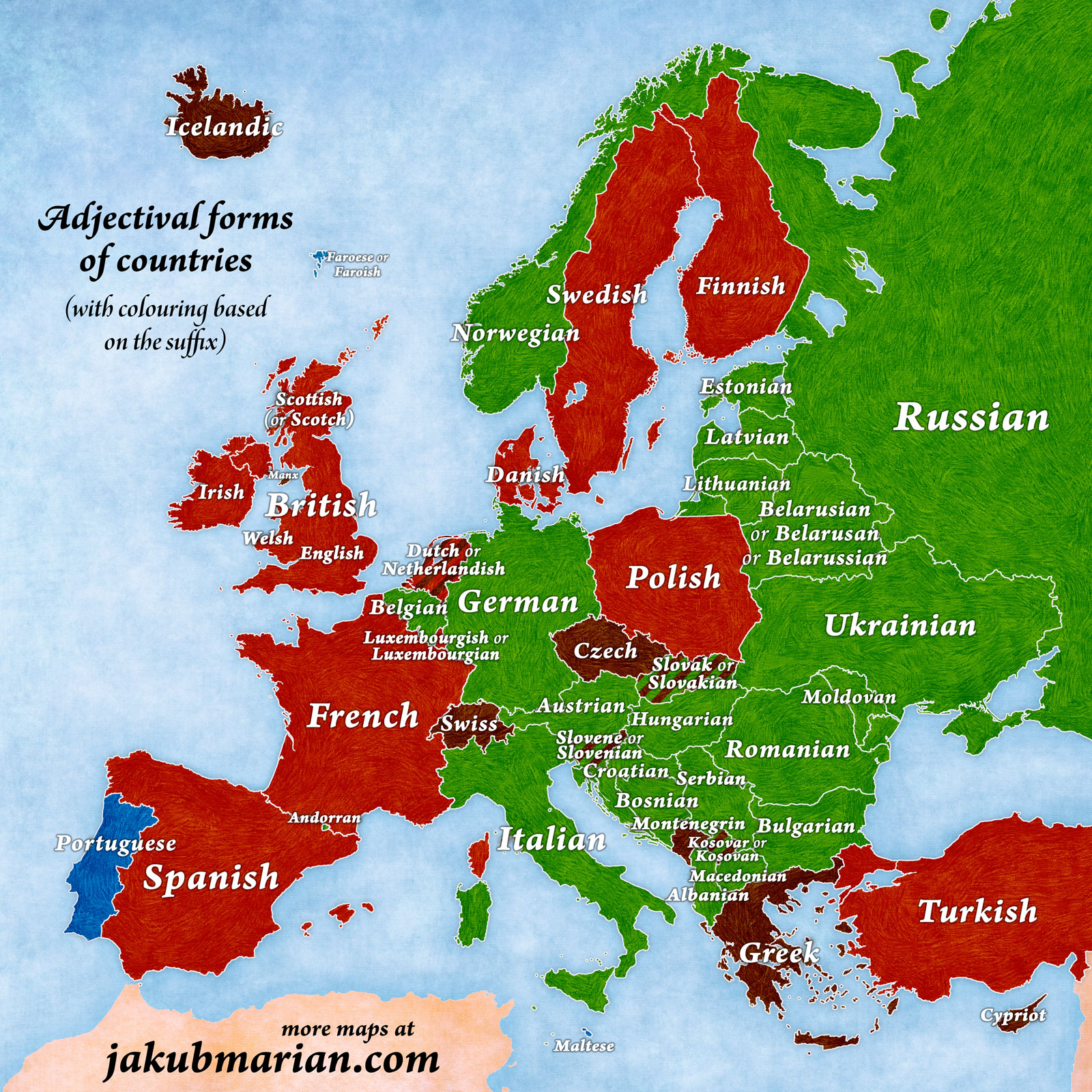 As you have probably noticed, the adjectives are divided into 4 groups: those ending in -(i)an, those ending in -ish, a few ending in -ese, and the rest. The -ish adjectives can be used as so-called collective demonyms, that is, collective names for the people living in those countries (e.g. “the British”, “the Swedish”, “the Polish”) and so can the -ese adjectives (“the Portuguese”, “the Maltese”, “the Faroese”), while the ones ending in -an take an -s to form a demonym, e.g. “the Germans”, “the Italians, “the Russians”. The last group is mixed; we say “the Swiss” and “the Dutch”, for instance, but “the Czechs” and “the Greeks”.

There are a few details to notice: It may seem odd that French has the colour red, but, etymologically speaking, the -ch in French comes from the same Old English suffix as -ish and is essentially a contraction of the word “Frankish” (like “Scotch”, which is a contraction of “Scottish”).

The word German also seems to break the rule; it seems that the correct version should be “Germanian”. However, the root of the word “Germany” is “Germ” (of uncertain origin but possibly from a Celtic word meaning “neighbour”), hence the term “German” (“Germanus” in Latin), a “Germ-inhabitant”, which gave name to the whole region in Latin (Germania) and later in English.

Finally, you may be asking why “English”, “Welsh” and “Scottish” are mentioned, unlike all other “minority” regions. The reason is that England, Wales and Scotland are usually called “countries” in English, even though they are not independent countries in the same sense as, say, Germany and France are.