Standard & Poor’s recently reduced the credit rating of Poland as a reaction to political changes implemented by the new Polish government, which made me wonder how it compares with the rest of Europe. “Why does it matter? It’s just a few letters published by a private company,” you may ask.

The problem is that credit ratings have a significant impact on each country’s ability to borrow money (the worse the rating, the more expensive it is), which, indirectly, has an influence on its economy and currency (złoty, the currency of Poland, dropped to a four-year low after the announcement).

The following map shows the credit ratings of European countries published by Standard & Poor’s (as of 17 January 2016). To be more specific, it shows the long-term foreign currency credit ratings (which are, however, identical to the local currency ratings in almost all cases). In the case of Moldova, whose rating is not published by S&P, the label represents its present rating by Moody’s. 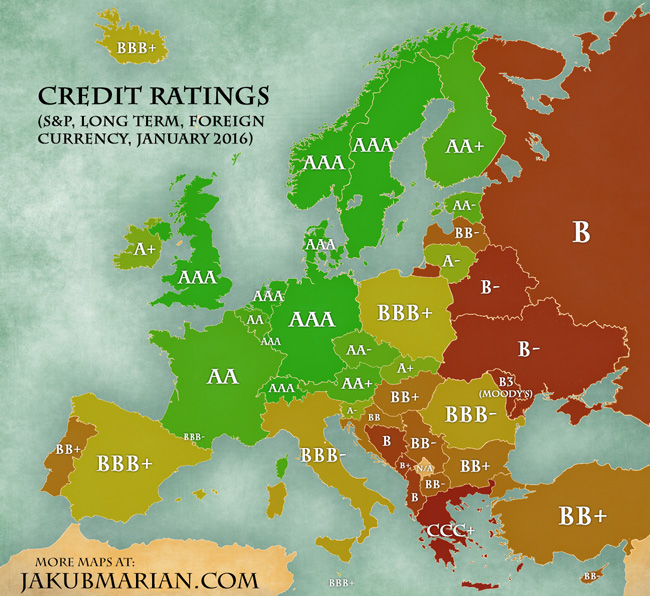 To understand the ratings, note that AAA and AA mean that the country is almost guaranteed to meet its financial obligations. A indicates that the country’s ability to meet its commitments is still strong, but it is more susceptible to the adverse effects of possible global changes.

The BBB rating is the last one that is considered investment grade. The country has adequate capacity to meet its financial commitments at the moment, but adverse economic conditions or changing circumstances are more likely to lead to a reduction of said capacity. Obligors rated BB or B face major ongoing uncertainties and exposure to adverse business conditions.

The rating CCC of Greece means that it is vulnerable and depends on favourable financial and economic development to be able to meet its obligations.