First, I should note that I am not a doctor, and nothing written in this article should be understood as medical advice. The article is based on my personal experience, and it is possible that what I describe below may not work for you, since every case is different.

Nevertheless, I feel compelled to share my own experience because I suffered from debilitating dizziness, which later turned into headaches, for almost a year and a half, and no doctor was ever able to help me, even though the cure was pretty much trivial.

In June 2015, I started to feel intermittently dizzy. I often didn’t “feel myself”, and I had problems concentrating, which significantly interfered with my studies (I was writing my master’s thesis about a relatively difficult mathematical topic). A few months later, I also started to get tension headaches. To summarize the symptoms:

I also noticed the following fact, which was a little strange:

Common OTC drugs like ibuprofen didn’t really help to relieve the symptoms; however, drinking alcohol did.

Of course, this is not good news if you don’t want to become an alcoholic, but in retrospect, the fact that alcohol helped really makes sense (because alcohol works as a muscle relaxant).

I felt really bad for about a year and a half, until December 2016. I went to see several doctors in the meantime and had a lot of blood work done (including tests for Lyme disease), but none of them found anything suspicious. I had a 24-hour ECG, which turned out fine. I even bought a blood glucose meter and tested my blood sugar levels regularly before and after getting dizzy. As you might expect, there was no change, and my blood sugar was pretty much in the ideal range.

Since I had an impacted wisdom tooth that hurt from time to time, I decided to have it surgically removed (which was many years overdue anyway), because I read on the Internet that impacted wisdom teeth were the cause of headaches for some people. Unfortunately, it did not influence the dizziness and headaches in any way.

I also went to a neurologist, who told me that “those things sometimes happen to males of my age” and suggested that I suffered from depression (and was looking at me as if I was just making my symptoms up). Needless to say, I never went there again.

It took me a year and a half to find the source of my ailment, and the epiphany wasn’t a result of what the doctors told me; it was a result of the process so despised by doctors—googling my own symptoms.

It turns out there is something called myofascial trigger points, which are small stiff areas in muscles, somewhat like tiny permanent cramps. It is not completely understood how and why they form (and even what exactly they are), and until recently the whole concept of a trigger point was mostly ignored by mainstream medical science (but their existence has been proven using modern imaging techniques like MRI).

The strange thing about those points is that they can cause pain in different places than where they are located. Headaches and dizziness are likely to be caused by trigger points in your neck. In my case, they were caused by trigger points in the suboccipital muscles (approximately marked by the red circle in the picture below, just where the skull meets the neck), which does not seem to be unusual at all, as some physiotherapists believe they are the most common source of headaches. 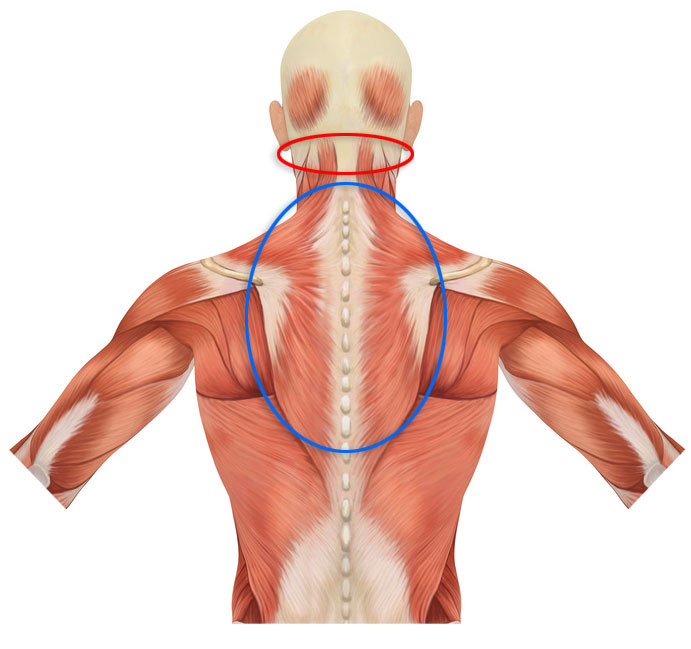 Oddly enough, when I pressed the correct spot on my suboccipital muscles hard enough, I felt pain in that spot and in my forehead and behind an eye, similar to my headaches, but no pain between the spot and my forehead. This was a highly counterintuitive experience for me; it is a bit like bumping your “funny bone” (ulnar nerve in the elbow), which produces unpleasant sensation in your hand, far away from the place of injury.

What you can do

The way trigger points are normally treated is by applying pressure to them (and sort of “crushing” them). I went to a massage therapist (who happened to be experienced in treating trigger points), and I am quite happy I did, because she found the right spots.

It turns out I probably would not have been able to find them on my own because I would have never applied enough pressure—the problem is that the suboccipitals are hard to reach because they are hidden behind another layer of muscle (you cannot actually see the suboccipitals in the picture above; they are located underneath the muscles you see).

What I can recommend (but please do this at your own risk) is to use the fingertip of your middle finger to apply pressure to various spots in the top half of your neck above (this may work better if you lie on your back, and you should experiment with using either hand on either side of your neck).

The surprising thing was that finding the right spots required quite a lot of pressure, much more than you would normally apply during a massage. The trigger points seemed to be rather deep, but once we found the right spot, I knew it was it because I felt intense pain on my forehead and behind an eye.

When you find the right spot, simply apply enough pressure to it so that you feel pain similar to your headache (but not so much that you would feel uncomfortable) and keep it pressed for about 20 seconds. I did that several times a day for about a week or two on all the spots I could find, and my headaches, as well as feelings of dizziness, slowly subsided—and I have been pretty much headache-free for the last 3 months.

Even if you are able to find the right spots in your suboccipital muscles yourself, I would still recommend visiting a massage therapist. I also had several trigger points in my trapezius (the blue circle in the picture above), which were causing dull pain all over the place, and I found it impossible to treat those properly myself.

I hope this article helped you, even though it is based purely on anecdotal evidence. Some critics say that the whole theory of trigger points is pseudoscience, but those people have no idea what they are talking about. The fact is, pressing certain irritable spots on muscles in the neck can cure certain types of headaches, and if it works for you, great.

However, it is important to understand that this is by far not the only possible cause of headaches. Headaches can be caused by neurological disorders, hypothyroidism, and other medical conditions, in which case the procedure described above will not work for you. Nevertheless, it is worth trying.