July, the seventh month of the year, was named iūlius by the Roman Senate in honour of the Julius Caesar, and the Latin name spread to most of Europe with the rise of the Roman Empire. Words derived from iūlius are shown on a red background in the map below: 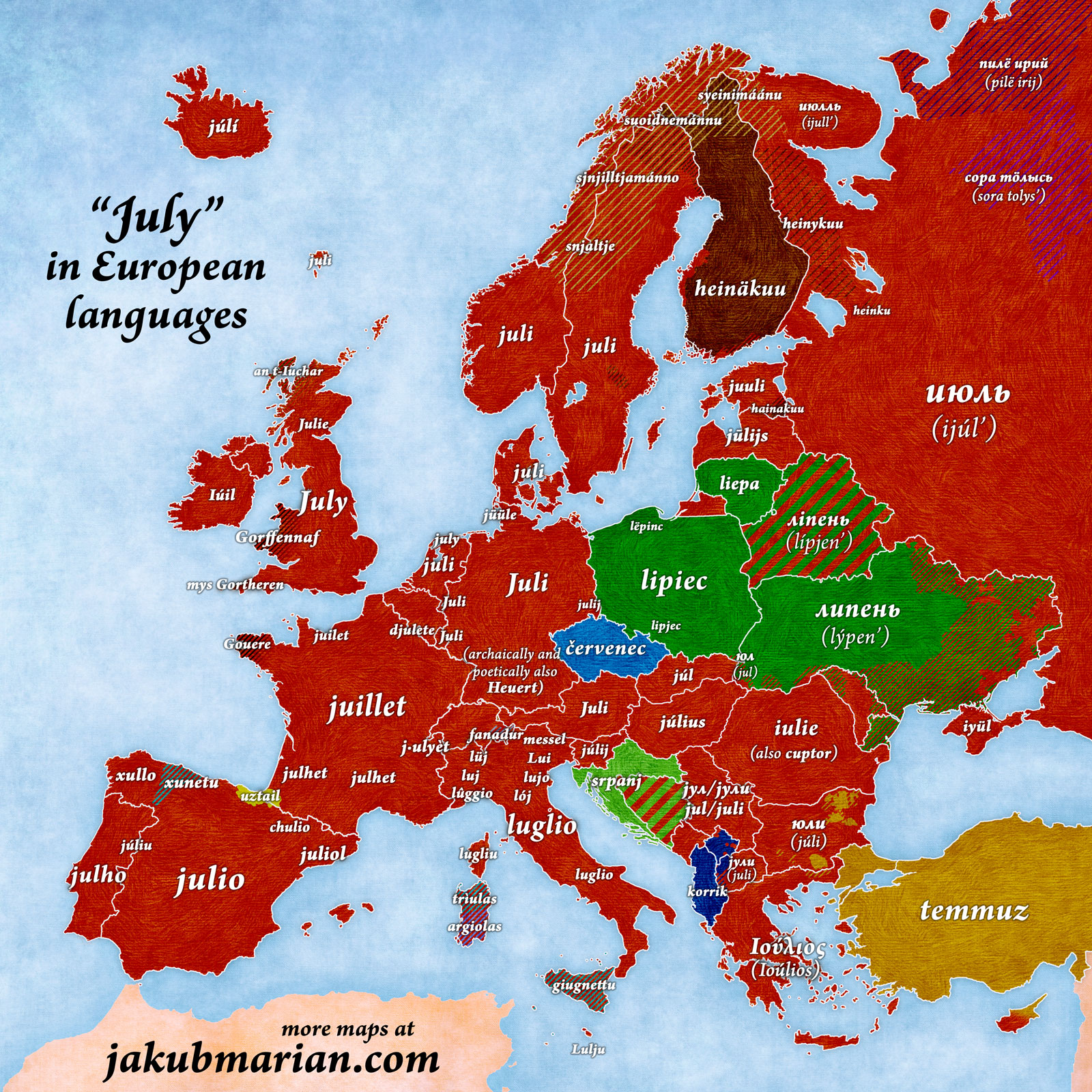 Other etymologies are as follows: Polish lipiec, Ukrainian lýpen’, Belarusian lípjen’ and other similar similar expressions come from the Slavic word for a linden tree. Lithuanian liepa literally means “linden” and comes from the same Proto-Balto-Slavic root. Czech červenec is derived from červen, “June” (read more about its etymology here). Croatian Srpajn is derived from srp, “sickle”.

Sardinian trìulas is derived from the verb triulare “to thresh”, and argiolas from argiola, a place for threshing. Sicilian giugnettu is a diminutive of giugnu, “June”, and Asturian xunetu is a diminutive of xunu, “June”. The Romansh word fanadur comes from fanar, “to make hay”. There is also an alternative in some Romansh-speaking areas: lügl (which is derived from Latin iūlius). In Ladin (spoken in a tiny area in the north of Italy), the word is messel, but I wasn’t able to find any sources explaining its origin.

Finnish heinäkuu, Võro hainakuu, Karelian heinykuu, and Veps heinku literally mean “hay month”. Note that although the words for hay sound similar to the English word, they are not related to it. Northern Sami suoidnemánnu (and other Sami variants probably as well) also means “hay month”. However, the Sami word “suoidni” is not related to Finnish “heinä” (which is an early borrowing from Proto-Balto-Slavic). The Komi expression seems to mean “mixed month” (but take it with a pinch of salt), and I wasn’t able to find the meaning of the Nenets one. If anyone knows, please, let me know in the comments.

Turkish temmuz is named after the Sumerian god of food and vegetation, Tammuz. Albanian korrik is derived from korr, “harvest”. Basque uztail means “month of harvest”.