After I published my recent article about the Number of metal bands per capita in Europe, I got quite a few comments saying that my use of the expression “per capita” was wrong, since the infographic in the article shows the number of metal bands per 1 million people, not per capita. I believe the main reason why I got these comments was how the link looked when shared on Facebook: 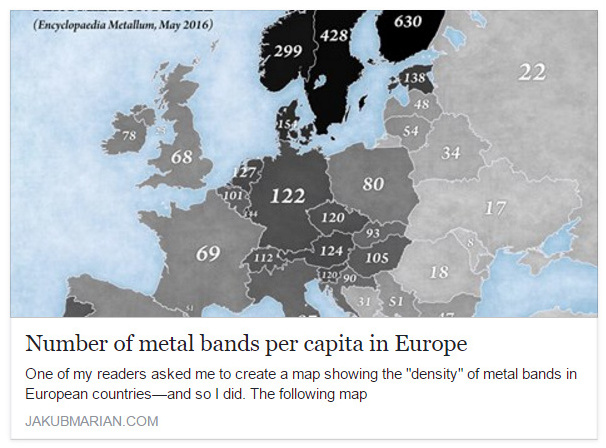 Unfortunately, Facebook crops the unit (“per 1 million people”) out of the picture, and the expression “per capita” used in the title looks like it refers to the numbers shown in the preview, which, I admit, may be confusing, and I’ll look into ways to change it in future articles. However, some commenters argued that even naming the article “X per capita” is wrong. Is it, though?

“Per capita” is a convenient label to make it clear what type of data the article contains, irrespective of actual units used. An article named “Number of metal bands per 1 million people” would be hard to find, since you cannot know what exact units the authors might use. If you wanted to google, say, the average number of cars per person in a country, would you rather type “number of cars per capita” or “number of cars per 1000 people”?

Another good reason to use a “neutral” label like “per capita” is that one article may contain several tables with different units or the units may change in the future as the data change—and surely, the title of an article should not have to change just because a few numerical values changed.

A few commenters even argued that I, being a person trying to promote the use of good English, should “know better”. However, English usage is not governed by dictionary definitions; it is decided by how people actually use English, and I was merely following what could be called the house style of Wikipedia.

Articles on Wikipedia with “per population” data are customarily named “per capita”, even when the unit used is actually different. Just to give a few examples:

According to the logic of some of the comments I got, each of these titles is wrong. Would it make Wikipedia any better if “per capita” in each title were replaced by the entry in the right column? I don’t think so.

The purpose of a title is to make the topic of the article clear and to make the article easy to find. Arguing that using the expression “per capita” in a title is wrong seems to me like trying to convince a lexicographer that he or she shouldn’t list Stephen King’s novel “The Shining” as “Shining, The” in a dictionary or encyclopaedia. There are good reasons for doing both, and both are common in encyclopaedic contexts.