“Mother” is mama in Mandarin Chinese, mã in Hindi, mama in Swahili… The word for “mother” begins with an “m” in the vast majority of the world’s languages, across unrelated language families and different continents. How is that possible?

The similarity led some linguists to believe that the words “mama” and “papa” might be remnants of the hypothetical Proto-Human language, that is, a language from which all human languages started to develop some 100,000 years ago.

However, it is not known whether such a language even existed (whether humans had had a fully developed language before they began to migrate to different parts of the world), let alone whether a particular word like “mama” could remain unchanged for so long.

In 1962, R. Jakobson, a Russian-American linguist, proposed an alternative theory that is now generally accepted. It goes as follows: Babies have a period of development (from about 6 to 10 months of age) called babbling. During that period, infants experiment with their vocal tract and start producing simple repeated syllables, with “mamama…”, “papapa…” and “bababa…” being among the first.

While the word developed independently in different language families, most words in Indo-European languages share a common origin, shown in red in the following map: 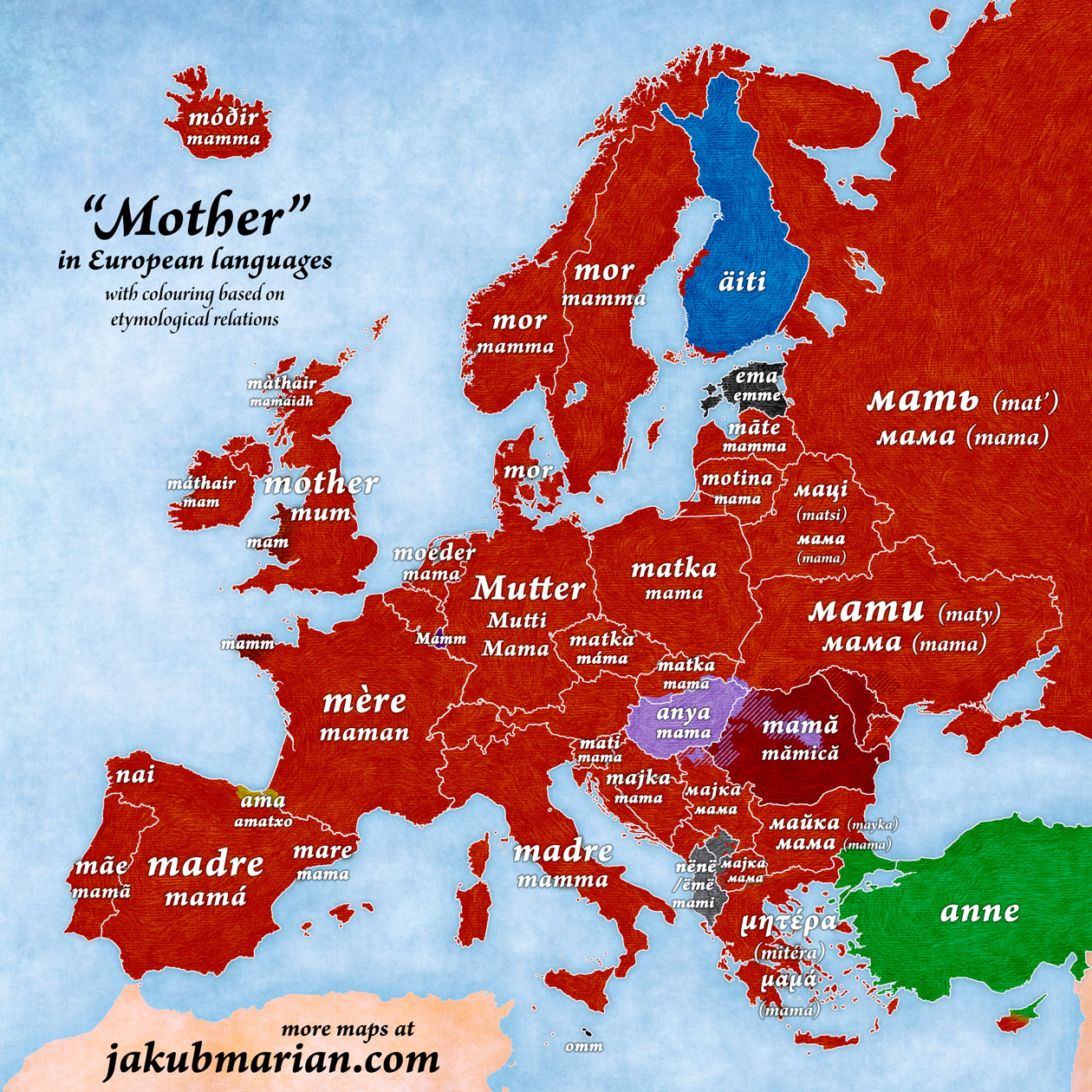 The common precursor of the words shown in red is Proto-Indo-European *méh2tēr (a word, reconstructed by linguists, that was used before European languages started to diverge), which itself is probably a modified version of “mama”. Most of the familiar baby-talk “mama” versions also probably share a common ancestor, but since the word has a natural tendency to develop spontaneously, tracing its origins is a nearly impossible task.

There are also a few exceptions. Mother is mam and mamm in Welsh and Breton, respectively, which developed independently from child-talk in Celtic languages. Similar independent developments occurred in Romanian (mamă), Albanian (nënë or mëmë). The Galician version (nai) seems to have developed by losing the “t” (becoming mai, which is still used in some parts of Galicia) and then changing to nai.

Finally, it is probably not surprising that the word is somewhat different in non-Indo-European languages of Europe, namely Finno-Ugric languages (Hungarian anya, Finnish äiti, and Estonian ema; however, these words are not related), Basque (ama), and Turkish (anne). Finally, the Maltese word omm comes from Arabic.