As the job market for unqualified workforce shrinks, more and more people realize that completed secondary (high school) education no longer gives them any edge in their job search, and most young people strive to obtain higher qualifications after graduating from high school.

Obtaining an academic degree has become easier over the years, not only because, as some critics would note, the average quality of education went down, but also thanks to the Bologna process, which created the opportunity to obtain a bachelor’s degree without having to complete a full (and often much more demanding) master’s degree programme.

Nevertheless, there are large differences in educational attainment among European regions. Take a look at the following map, which shows the percentages of people aged 25–64 who completed some form of tertiary education, which does not include only university degrees, but also qualifications below the level of a bachelor’s degree, variously referred to as “associate degrees”, “higher vocational training”, etc.: 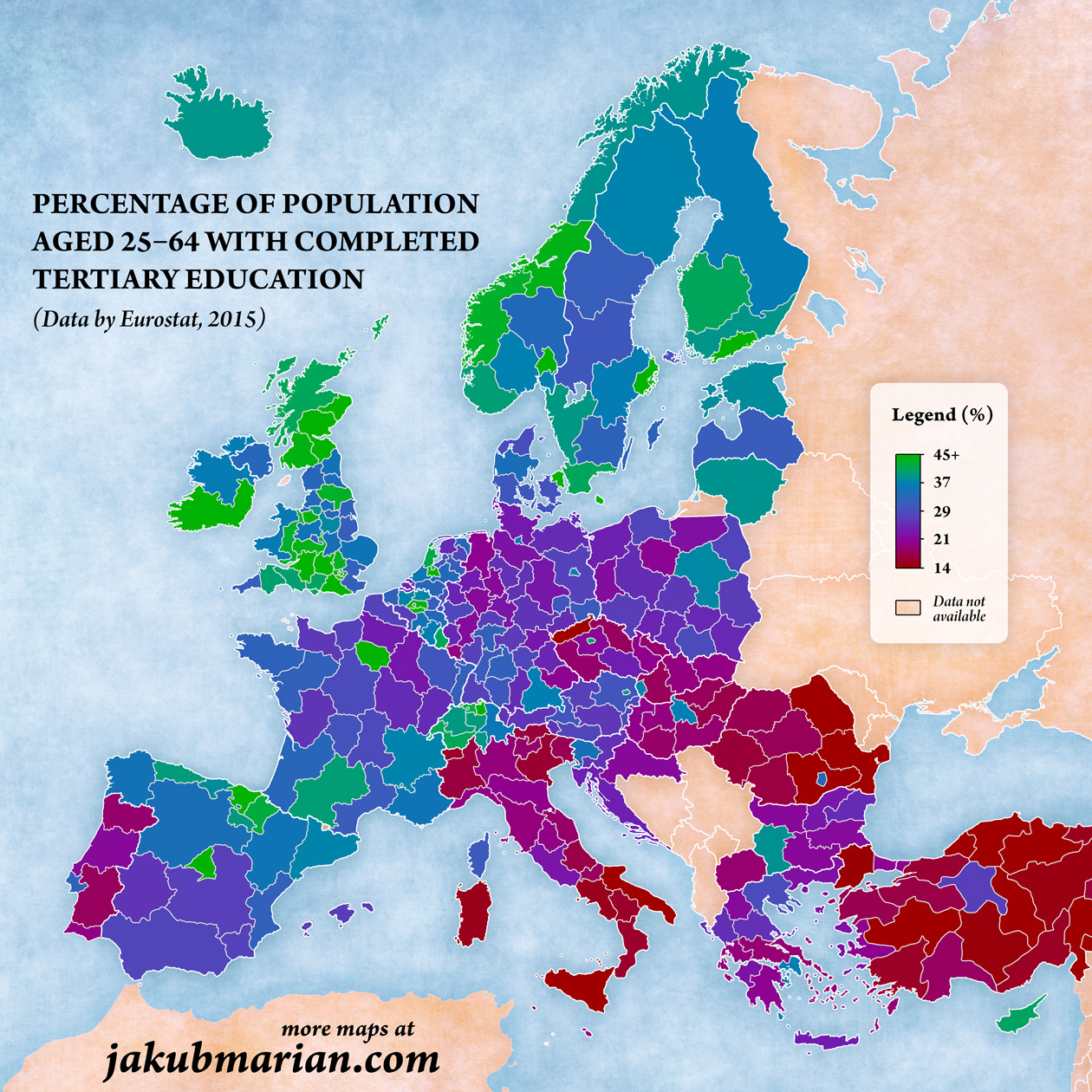 There are a few regions where over 50% of the population have completed tertiary education: London (UK), Walloon Brabant (Belgium), Oxfordshire and nearby counties (UK), Eastern Scotland, Oslo (Norway), Helsinki (Finland), and Zurich (Switzerland).

Of course, since all the changes to the educational system like the Bologna process took place relatively recently, a better measure of the current and future situation are the percentages among young people. The following map shows the percentages of tertiary education attainment among people aged 30 to 34, and the situation looks much brighter (or should I say “greener”) than the general percentages: There are several things to notice. Large cities, especially in Central and Eastern Europe, fare significantly better than more rural regions. This should not be surprising, as large cities are usually the places where higher degrees are both obtained and required to find a job.

One surprise, clearly visible in the map, is the German states of Brandenburg, Mecklenburg-Vorpommern, and Saxony-Anhalt in Eastern Germany, where the percentages of young people with completed tertiary education are significantly lower than the overall percentages. This rather worrying trend is probably caused by migration of young qualified workers to either Berlin or Western German states.

It should also be noted that, while it seems that Germany in general is lagging behind most other European countries (which seemingly contradicts its low unemployment rate and great economic success), the disparity is caused by a relatively unique large-scale system of dual education widespread in Germany.

Dual education is a system in which a pupil in upper secondary education attends a special type of vocational school for (usually) 2 days a week and spends the rest of the week working as an apprentice in a company cooperating with the school. That way, pupils obtain the required qualifications directly, without having to participate in tertiary education.

In general, it is very common for German companies to offer special training programmes for prospective workers, which may teach the worker all the necessary skills without providing formal academic education and an academic degree.