The M-Stick is a musical instrument I have designed and which I currently play. It was manufactured by Procházka Custom Guitars in January 2012. You can see a diagram of it below (the diagram is proportional, i.e. the ratios of sizes agree with the real instrument). The two circles represent knobs controlling volume and tone, and the circle with a little bar is a switch between different pickup positions. The M-Stick has three additional frets below the zeroth fret of the standard guitar; the scale length of the M-Stick is 30”.

As you can see, the design differs a lot from the traditional guitar. The instrument has 10 strings, which would be unplayable when played in the traditional way; instead, it is played on one’s lap like a lap-steel guitar, but it is plucked using fingers like a traditional guitar. It utilizes the major third tuning, thanks to which all types of chords and scales have only one fingering pattern anywhere on the fretboard. White dots mark the “white keys” of the piano (i.e. the notes A, B, …, G). There is a material that mutes the strings between the zeroth fret and the first fret (with the exception of the lowest string) to avoid unwanted resonances and accidental open string plucking. 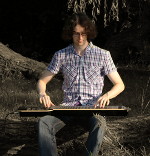 The M-Stick opens fascinating new possibilities of playing style. Since one doesn’t have to have his left thumb behind the neck, it is possible to fret the bass strings using the thumb. Since the thumb is relatively independent from the other fingers, it is quite possible to play a bass line using the thumb while still playing a guitar part using the other fingers. Furthermore, the M-Stick is capable of playing the tones from F1 to F6 which gives it the full five-octave range. As in the case of most string instruments, this range cannot be utilized all at the same time. However, one hand position includes approximately three octaves plus a perfect fourth, which is one octave more than on the guitar.

“Can I build the instrument myself?”

Finally, here’s good news for all string instruments fans who would like to try the design themselves: I claim this invention free for any commercial or non-commercial use. This means that you cannot patent it, but you can manufacture, distribute and use it in any way you want. The only condition is that I have to be mentioned as the original inventor and that it is still called the M-Stick.

Can I listen to a recording?

I don’t have a solo recording with the M-Stick yet, but you can hear its mellow electric guitar sound in a recording of my mother’s song Waterfall: